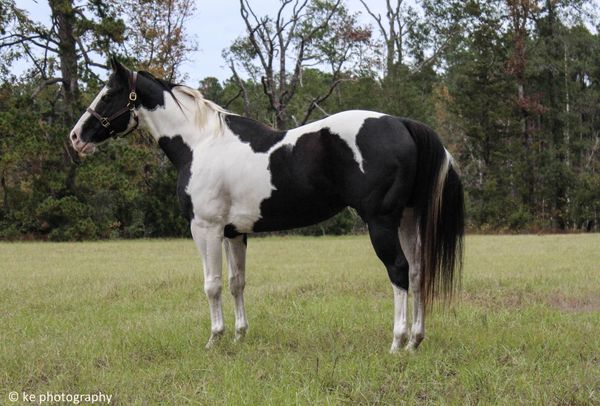 
"Crush" is a well mannered, well put together stallion with an incredibly kind eye. He is a 100% color producer as of 2013, and is on the Future Fortunes waiting list. He never got a chance to run due to an injury as a two year old, but the offspring he has put on the ground so far should be able to prove him as a sire in the future. He is a true black and white and stands at 16.2 with impressive bone and body, as well as a flawless pedigree.

His sire, Okey Dokey Dale, SI 108, was 1999 AQHA champion 3-year-old colt with earnings of over $250k and his progeny have earned over $12 million and counting. First Down Dash, First Prize Rose, Dash For Cash, Okey Dokey Baby and Zevi are all Champion/Champion producers with progeny earnings well over $100 million!

His dam's side is just as impressive. He is out of Babes Squaw Jet, SI 97 is a stakes placed race winner with over $50,000 in earnings. She had 42 outs and retired sound in 1997, after 4 years on the track. She earned her Superior and was named Champion Running Two-Year-Old Filly in 1993.

We are very excited for the opportunity to own and stand this stallion. He was recently purchased, so we are working on getting all of his information together and it will be posted soon.