Frenchmans Guy – the most prolific son and sire of Sun Frost.  As a Finals qualifier PRCA Badlands Circuit, South Dakota Rodeo Assn., Northwest Rodeo Cowboys Assn., Reserve Champion, Barrel Futurity & Derby Money Earner, he was proven barrel horse himself.  As a barrel sire with Equi-Stat progeny earnings of over $14 Million, he has remained on the top 5 for over a decade and is currently the #2 sire for All Time Sires based on progeny earnings. 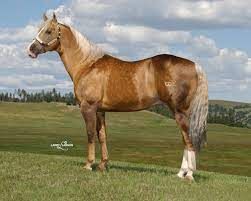 Dam: SS Jitterbugged
Homozygous daughter of Sure Skippa (APHA reserve grand champion) who was crossed with nice AQHA stallions such as Firewater Flit and Frenchmans Guy.  This mare has paint progeny running barrels at the local levels.


2nd Dam:  Miss Azure Bug, tobiano daughter of Olympia Joe out of a Bugs Alive in 75 daughter. Olympia Joe, who was one of the all time APHA leading sires of ROM Race, Superior Race and Money Earners (which includes Barrel and Pole Racing).  Bugs Alive In 75 (QH), SI-94 AAA, is the outstanding quarter horse running stallion who has consistently appeared on the list of leading maternal sires of barrel horse money earners.